Question about someone going “over my head to our boss”

Our media buyer/planner went over my head to our boss (owner) of the company with some complaints about me - I believe these were things she should have come to me first about . Most of the complaints are not reality. One things she said is that she is not interested doing web/internet advertising. Well that is part of all of our jobs. Please help - i think she should have come to me first - what do you think?

Yes, the Media Buyer should have come to you first, whether she works directly for you or she’s part of a staff department to serves you and other departments within the company. Common courtesy dictates that she comes to you first, so you have an opportunity to address the complaints before going to the boss.

If the Media Buyer reports directly to you, the transgression is serious and you need to tell her in no uncertain terms that she is violating the chain of command and communication, that she needs to come to you first, or else…

If the Media Buyer is an internal service organization, she could have shown the courtesy of coming to you first, although she wasn’t really obligated to do so. Internal Media Buyers generally have a dual role: service provider and standards enforcer. As service providers, they need to help other departments buy ad space and time. As standards enforcers, they need to help their boss keep costs down and get the most buck for the company’s advertising dollars. If this is the case, she’s got all the right to talk to your boss anytime about media buying issues that may be of interest to the boss.

Now, about her pesky complaints. You say the complaints are not real, so that places her complaints in the category of badmouthing. She needs to be confronted on that, so your boss doesn’t get an erroneous impression of you. It seems to me that she may be digging her own hole by saying that she’s not interested in doing web/internet advertising. Whether she’s interested or not, the web is now part of people’s lives, over 52% of people search the internet when they need to buy a product or service. She may say that she only need to reach the leftover 48%, but that number will just continue to shrink if the current internet usage trend holds.

Talk to her, find out why she is not interested in advertising on the web, and find out why she didn’t come with her complaints to you first and ask her to do so in the future. Let her know she has inflicted some damage by going directly to your boss with her complaints. She may be clueless about it, so let her know there are consequences to her actions. After all, you could always do the same to her.

But that would be war at work, and neither of you would want that. 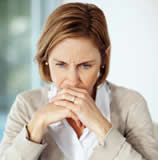