Rumors in the Workplace

Whether we like it or not, rumors in the workplace exist.

Take a look at the chart below based on a recent survey of how often employees engage in titter-tatter at work. 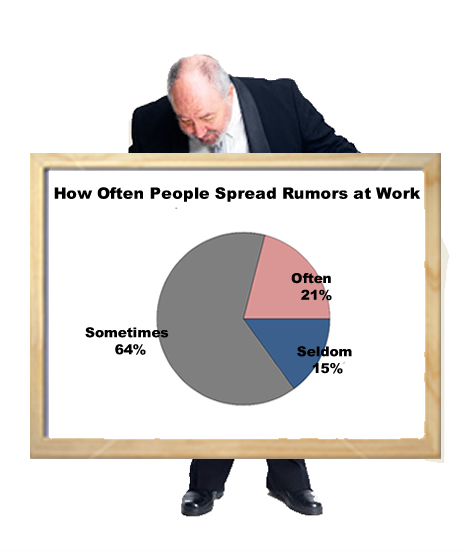 Many managers take the attitude that addressing hearsay is not worth their while, that they would not stoop so low as to dignify dirt. Big mistake. In organizations where rumors and gossip are allowed to flourish, morale and productivity are bound to be affected.

Why Do People Spread Rumors

There are several possible reasons.

Studies have shown that people will be more prone to rumoring when feeling anxious or stressed out. It's a way of making sense of a stressful situation.

Another factor that contributes to the spreading of hearsay is access to easy distribution. As email and the Internet became prevalent, the means of spreading a hearsay grew exponentially. With one click – ok, a few clicks – you could spread a rumor you got via email to all your contacts, or by posting the rumor on a blog, web page, or forum.

Sometimes we spread hearsay in a mindless way, without being aware of how many ways rumors hurt people. Keep in mind that even truthful rumoring, is for the most part detrimental to the wellbeing of individuals and organizations.

You may be wondering if there is anything you can do to stop rumors in the workplace.

There are very specific steps you can take to manage the rumor mill. Whether rumors are about you or about others, you can do something about it.

You would think that feeding the grapevine can be useful at times, and indeed, it can be, by filling a void left by lack of official information.

We are all guilty of dishing it out, we either embellish what we hear or leave out important details that change the essence of the information. Little by little, the message is distorted as it’s passed around.

So, before we get judgmental about people that spread hearsay or gossip, let’s look in the mirror and figure out if we are gossiping ourselves. Let’s fix our own affairs first, and zip it up.